Has a Start-Up Found the Secret to Farming the Elusive Truffle?

The American Truffle Company has a new technique that it says can expand the range of the Perigord truffle in North America, but success is proving costly. NAPA, Calif. — Gig the truffle dog zigzags with her nose to the ground among hundreds of oak and filbert trees. Her goal is to sniff out the Perigord truffle, a fungus so prized by chefs it is called the diamond in the kitchen.

This is a training run: Gig is looking for — and eventually finds — a bit of truffle planted by her owner, Alyson Hart, at the behest of the vineyard’s owner, Robert Sinskey. Soon, Mr. Sinskey hopes, the English shepherd will be searching for the real underground McCoy.

Mr. Sinskey is a winemaker who is branching out into a new field: truffle growing. It can be a challenging business. Truffles, which grow underground among the roots of certain trees, are famously difficult to domesticate, and then require trained animals like Gig to find them by scent. Once unearthed, they lose flavor quickly.

Yet they foster deep devotion. Black Perigords can sell for anywhere from $600 to $1,200 a pound, depending on the season. Only white truffles, which have eluded domestication entirely, are more prized and expensive.

There are some large Perigord farms in Europe, New Zealand and Australia, but things haven’t gone quite as well in the United States. A few years ago, a successful truffière (truffle farm) in Tennessee was badly damaged by a filbert-tree blight. Since the 1970s, millions of dollars have been invested, and lost, by people who have tried to cultivate high-end truffles in America.

Mr. Sinskey, who has planted 588 trees that he hopes will eventually bear fragrant and valuable black truffles, watched Gig work. He acknowledged the risk of his plan: “It’s more the romance right now.”

Five years ago, Mr. Sinskey became a client of the American Truffle Company, which sells trees that have been inoculated with the truffle fungus. The company is the brainchild of Robert Chang, a former Yahoo executive, and Paul Thomas, a British mycologist (a biologist who studies fungi).

Their idea is to expand the range of the truffle in North America using a proprietary new technique, developed by Dr. Thomas, for inoculating the roots of trees to more reliably grow the fungus. Dr. Thomas declined to describe his method, but said that it had been successful in other foreign markets, including Macedonia, England and Wales.

In the United States, the company has lined up a few prominent grower-partners over the last several years, including top regional vineyards like the Robert Sinskey Vineyards, Peju Province and the Rocca Family Vineyards.

Another early adopter here is Paul Otellini, who retired as chief executive of Intel a couple of years ago. He and his wife, Sandy, are partners with the American Truffle Company and planted 1,500 to 2,000 nut and oak trees in 2011. “The demand seems very solid,” Mr. Otellini said.

The company has also planted orchards in Sonoma and in North Carolina, Alabama, and Ontario. This winter, farms in Kentucky and New Jersey will plant trees. But the company has focused much of its efforts on Napa Valley, with its constellation of high-end vineyard owners, chefs and other foodies.

One of the largest Perigord producers in the world is the Truffle and Wine Company, in the fertile valley of Manjimup in Western Australia. The company produces about seven tons of highly acclaimed winter truffles a year. It’s a model for what Mr. Chang, 45, and Dr. Thomas, 35, hope to achieve in Napa: a farm that grows a combination of wine grapes and truffles.

Each acre of truffle orchard can produce 30 to 50 pounds or more of Perigords and can earn seven times or more what an acre of wine grapes does. But it takes a minimum of five years for truffles to begin emerging after the trees are planted, and seven to 11 years to achieve peak production.

Truffles are fungi that process nutrients for trees in exchange for sugars secreted by the roots. They start out covering the roots as a glove covers fingers, and send threads into the soil that form larger masses that become truffles. Perigord truffles — black, knobby and redolent — are found a few inches underground and can range from as small as marbles to as large as softballs. Also called black truffles or winter truffles, they sell for top dollar at the peak of the season, wintertime, when the flavor is richest.

Only the white Alba truffle, which grows wild in Italy and has so far defied domestication, fetches more — up to $2,000 to $3,000 a pound. In 2014, a four-pound-plus white truffle sold at a Sotheby’s auction for more than $61,000 for its unusual size as well as its flavor. Another high-end variety, Burgundy truffles, bring $300 to $600 a pound, but trees produce two or three times as many of them. The prized black truffles once grew only in the Perigord region of France. But France figured out how to domesticate them 40 years ago. Now most French Perigords are farmed and are no longer gathered wild.

As a child, Dr. Thomas loved foraging for nuts and berries at his Manchester, England, home, and was particularly entranced by fungus. “Mushrooms are so bizarre — they appear for a few days, and then they’re gone — and it quite fascinated me,” he said. He learned about truffles while studying the methods that plants use to send messages to one another, called signaling. Mychorrizae (the technical name for the fungus) assist in plant-to-plant communication. “It was like James Cameron’s ‘Avatar,’ here on Earth,” he said, referring to the sci-fi movie.

“These plants are talking to each other, sharing information and sharing resources through these fungus connections,” Dr. Thomas said. “I became obsessed.”

While working on his Ph.D. in 1996, Dr. Thomas sought out Perigord truffles for study, ordering them from an orchard in France. When he opened the package, it “flooded the whole house with aroma and it flavored everything, even my roommate’s orange juice,” he recalled.

But their outsize value also intrigued him, too, he said. “I thought, if I had my own orchard, I could sell them” — and then use those truffle riches to research whatever he wanted to.

Dr. Thomas says he has developed a way to inoculate very young seedlings with the truffle-producing fungus. He began offering the treated trees to landowners who agreed to fund his work. “They gave me all the cash I needed upfront to produce these trees,” he said. The trees in England are now producing truffles in small commercial amounts.

Mr. Chang first worked for Silicon Graphics designing microprocessors. Later he went to work at Yahoo, where he headed a global product marketing group. In 2003, while in Munich on a business fellowship, he first tasted the wafer-thin slices of a Perigord truffle. “I had tagliatelle tossed in butter with fresh-shaved truffles,” he said. “I loved it. I got hooked. I put my M.B.A. hat on and said, ‘This stuff is addictive and it’s expensive — I wonder if you can grow it?’”

He started a global search for someone who knew how to reliably farm truffles. “There was only one guy I could find who had incredible science,” Mr. Chang said. “Paul Thomas.” They met at a pub in Leicester Square in London and hit it off. In 2007, the two formed the American Truffle Company as a 50-50 partnership in the United States.

Some nurseries in the United States and elsewhere sell Mychorrizae-inoculated trees to growers. The two men have taken a different approach by entering into a partnership with growers that provides them expertise in return for a cut of any future profit. This also allows them to collect data from their various partners, ideally improving their methods for everyone. This model sets them apart from other nurseries, they say.

Prospective truffière clients of the company must first determine if their property fits climatic requirements. While burgundy truffles, a summer type, can grow almost anywhere in the United States, Perigords, which grow into the winter, must be in places where the ground doesn’t freeze at critical times.

If the climate and other conditions are right, Mr. Chang offers a partnership contract to the landowner. Not counting land, planting an American Truffle Company orchard costs $17,000 to $25,000 for the first acre. The per acre cost declines after that because of economies of scale.

The company installs a weather station and moisture sensor in the orchard to monitor conditions online. It advises the owner and contractors on the optimal tree density and orientation and the right balance of soil nutrients and pH, and on how to install a drip irrigation system. For these services and others, the company takes about a third of the profits.

In the United States, the company ships the trees from its lab near Portland, Ore., where Mr. Chang inoculates the seedlings. As the trees grow, the company offers advice on pruning and controlling weeds and grass.

When the truffles are ready to be harvested, the company says it will arrange for truffle dogs to find them, then transport them to buyers.

The fragrance and flavor of truffles begin to decline rapidly once unearthed, even when the fungi are iced and shipped in plastic foam containers. A truffle a few hours or a day old is a far different culinary experience from one that is four days or a week old, an observation backed by gas chromatography. This is where the American Truffle Company sees an advantage in locally sourced Perigords. It also plans to deliver truffles to customers quickly.

No truffles have been produced in any of the Napa orchards so far, but Dr. Thomas has checked the roots with a microscope and has found the presence of Mychorrizae.

Another person rooting for homegrown truffles in Napa is Ken Frank. As the owner and chef of La Toque, a one-star Michelin restaurant, Mr. Frank has cooked with truffles for decades, and said, “You need to find a place where the truffle can express itself.”

It is hard to overstate the importance of freshness, he said. “People go on vacation to Italy to eat truffles because that’s where they grow and are fresh. To have truffles 15 minutes away would be a game changer.” Mr. Frank uses 200 pounds of truffles a year.

Mr. Frank currently buys his winter truffles from the Truffle and Wine Company in Australia. In 2014, that company sold 700 pounds of black truffles to the United States and 11,000 pounds globally.

That said, the experiences of Tom Michaels in Tennessee offer a cautionary tale. He is also a mycologist and was the first person to grow Perigord truffles in the United States, in 2007, an undertaking that he says is more art than science. He once produced 200 pounds on about 10 acres, but is now down to 40 pounds after a filbert blight wiped out 85 percent of his hazelnut trees.

Has the American Truffle Company figured it out? “It remains to be seen how well their system will work,” Mr. Michaels said. “The frustrating thing about the truffle is we still don’t know the basic conditions.”

Growing truffles, Mr. Michaels added, “is not for the fainthearted.”

The original article is available on the New York Times here. 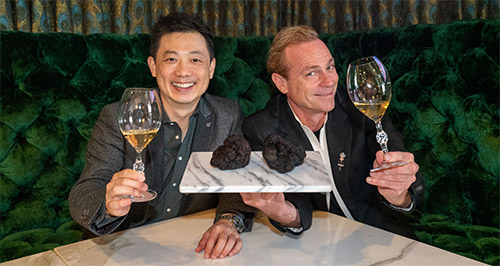